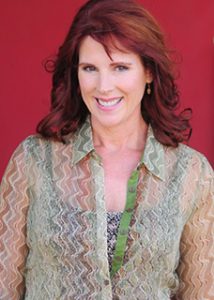 Patricia is perhaps best known for her work in the 1990 cult classic Night of The Living Dead as Barbara, the beleaguered heroine. Some may argue she is best known for her role as Lyta Alexander in the Hugo Award winning series, Babylon 5. Either way, she has been swept into a career that features horror and Science Fiction projects. She is less recognizable, but no less memorable, as the Horror Hag in Evil Dead III, Army of Darkness. Pat was featured in the Los Angeles Sci Fest of Plays, and recently, Criminal Minds.

Her recent work is helping people release their inner bad ass by leading epic quests to live their dreams of adventure and creativity. Join her at QuestRetreats.com!

Her favorite role is that of mother to her son, Julian.

Equally important to Patricia is her fund-raising activities for the children of Penny Lane. Through her efforts within the Science Fiction & horror community, Pat and her fans have contributed more than $350,000 to Penny Lane over the past several years. Since 1996, Pat, her friends, family and fans have made a holiday happen for the Penny Lane kids through the Be A Santa program. You can go to www.beasanta.org to join in the fun!