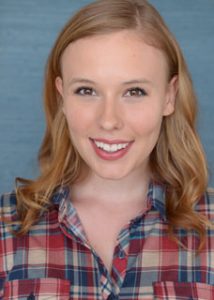 Elizabeth Lanier is originally from Nashville, TN. She moved to LA last year after graduating from the Stella Adler Studio of Acting in NYC. She majored in Theatre and Shakespearean Studies at Oglethorpe University in Atlanta, GA and studied Gender in Shakespeare as well as Elizabethan Art & Culture at the University of Oxford in the UK. She’s performed professionally in Nashville, Atlanta, and NYC with NSF, GA Shakes, Pinch ‘n’ Ouch, and Theatre for the New City. She’s currently taking scene study with Cameron Watson and enjoys pursuing film/tv work while making theatre with her friends. Check out some of her VO work as Hera at www.lessergodspodcast.com. She performs regularly with Shotz: LA, ZJU, and Trashcan Shakespeare. Also she wrote and is directing a play for the Hollywood Fringe this year called Narcissus & Echo, featuring a wonderful cast of actor/musicians. She is very excited to be a part of this sweet and hilarious film!