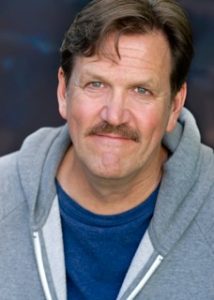 Daniel Hagen is originally from Iowa, formerly from Manhattan (with a month in Brooklyn until he was mugged) and now a Los Angeles based actor and writer…His first TV show appearance was with Jerry Orbach in the original Law and Order. His latest is Feud on FX where he got to play with Alfred (“Call me Fred”) Molina. Somewhere in between he test drove a Saab with Kramer on Seinfeld trying to get the gas tank needle past “E” and scolded Joey in Friends to put down his man-bag/purse… His first movie was with Brian DiPalma in the totally miscast Bonfire of the Vanities. His latest movie is going to be this one: Rose is A Rose is A Rose which he cowrote with director, Ron King.

Dan was a member the University of Iowa’s Playwright Workshop back when he still fit into size 34 waist Levis. Since then Mr. Hagen has eaten lots of popcorn and written and produced for radio and theater and even won awards doing it, including a Peabody…Oh yeah, Broadway…Charles Nelson Reilly directed him on Broadway and he still likes to appear on stage at his favorite LA theater company, The Echo, and can be seen this May in Dry Land at the Kirk Douglas (he’s 100 years old this year. Wow!) in Culver City. Kirk is a 100 years old. Not Dan. But you knew that.