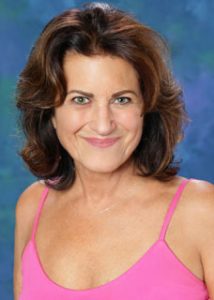 Barbara Goodson’s career covers many years and many genres.
Among her hundreds of characters, the throat ripping voice of “Empress Rita Repulsa” on the Mighty Morphin Power Ranger’s TV series, past films and live shows is still her claim to fame. Barbara also created the voice of “Mother Talzin” in Star Wars: The Clone Wars where she received a Best Actor Award. She recently voiced the “Demon” in the soon to be released psychological thriller, Tell Me Your Name, “Agnes” on Mr. Pickles, “Weathersnike” in Bottersnikes and Gumbles on Netflix, “Evil-Lyn” for the Masters of the Universe app and sung “Granny’s Yard” for Bitty Baby/American Doll. Other notables are “Princess Leia” for Lego Star Wars: The Force Awakens, “Kyla Mex & Clauda” in Star Trek Online, “Laharl” in Disgaea, “Naota” in FLCL, “Red Fraggle” in the animated Fraggle Rock, “Granny Chiyo” in Naruto, “Song’s Mother” in The Last Airbender, “The Shaman” in Legend of Korra, “Lady Vashj and Alexstrasza” in World of Warcraft, “Kid Goku/Zero” in Dragon Ball Z, “Salomon & TK’s Mom” in Digimon, “Sera” & “Marie Crystal” in Robotech, “Darling” in Lady and the Tramp II, and “Cruella Deville”& “Cinderella’s Step Mother” for Disney-On-Ice.  Barbara also received an Earphones Award for narrating “Blair Clemons” for the book On A Night Like This and was so proud to be a part of the wonderful cast of the children’s series CloudBread, playing “Wooli” the sheep and “Ruiz” the fox, “the grannies” and numerous “kids voices” which was nominated for an Annie Award and an International Emmy Award for children’s programming.
Recently, Barbara played “Mrs. Erickson” in gray wig for Episode 2 of Harley Quinn & The Joker VS. The Real World. She has also voice matched Jacki Weaver in The Five-Year Engagement and Life of the Party and can be seen in the horror movie The Chosen  as “Nana”, the “Wise Shaman” in the indie sci-fi film Home Sweet Home, in Good Satan as “Mother Teresa”, “Cybill” in Home Away From Home and “Aunt Eloise” (Doug Jone’s sister) in Cruel Will.  She’s looking forward to being part of the cast of the upcoming movie, The Order starring many of the original Power Rangers and other notables.