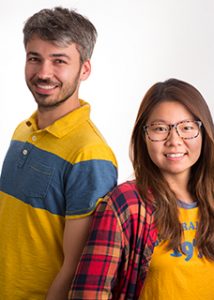 ang
Skylar is a budding filmmaker and proud Beijinger. Born into an artistic family, she grew up watching her father, a sculptor, sketching and carving pieces of jade. She made her first piece of jade carving at the age of nine as a birthday present for him.

The day before middle school graduation she resolved to become a screenwriter and would scare her parents at the end of high school with her four-year plan of moving to America and entering the film industry.

Arndt Werling
Arndt is a Los Angeles based filmmaker with a Bachelor’s degree from the New York Film Academy. Born and raised in Germany, he has experienced the European film market as an intern for ZDF Television and as a producer of short films.

Since moving to L.A., he has worked on more than 60 projects with filmmakers from all over the world. He produced several commercials, music videos and narrative as well as experimental shorts. As Assistant Director, Arndt collaborated on sets of both short and feature length productions. Projects he has worked on have been screened at Tribeca, Holly Shorts and Toronto.