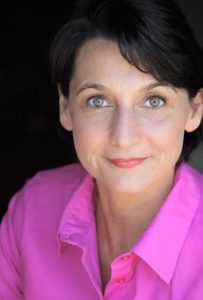 Born and raised in New York, Alison Martin began her acting career in Boston, performing in America’s Longest Running Comedy Shear Madness. During her time in Boston, she wrote for and acted in the television series A Likely Story, for which she won an Emmy.

Back in New York, she appeared Off-Broadway in original productions by Peter Tolan, David Ives and David Mamet. Her Broadway debut she made playing opposite of Nathan Lane in Neil Simon’s Laughter on the 23rd Floor.

She performed and wrote for the Lifetime Channel’s The World According To Us and received another Emmy nomination. Alison guest starred in numerous television series including Mad Men, The Office, Law and Order and Seinfeld. She starred in hundreds of commercials, of which two would went on to win the Clio.

Alison is currently working as producer/performer on the next installment of The Audio Adventurebook of Big Dan Frater, which just won a MarkTime Award as best comedy album.